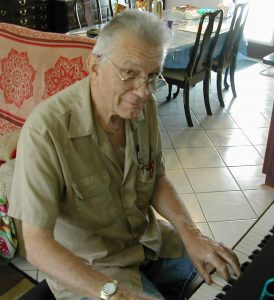 William F. Slavik age 83, passed away March 28th, 2021. He resided in Vancouver, Washington and previously lived in Leigh Acres Florida and Bedford Ohio. Full of laughter, fun and enjoyment of life, Bill was a passionate Antique Car enthusiast. He enjoyed all aspects of this hobby, from rebuilding cars, modifying them, collecting the parts and most importantly driving around in his Model-A’s. Bill had a career as an electrician in Local 38, and then successfully started and ran a business supplying other Ford Antique Car enthusiasts with hard to find auto hardware such as trim screws.

Bill enjoyed talking to everyone. His interests included dining out, trolleys, trains, transportation tokens, Hawaii, F1 racing and numerous history related topics. He made sure to attend his Bedford Ohio High School reunions. Bill played the Piano and favored many old songs that people would recognize and enjoy.

Bill is survived by his former spouse Mary Slavik, who took care of him, his sister Louise (Doc) Smith, his two sons, Lou (Chris) Slavik and John (Margie) Slavik, and granddaughter Kat Slavik. He was preceded in death by Suzanne Slavik (nee Clancy) and his parents Louis and Madge (nee Nyerges) Slavik.