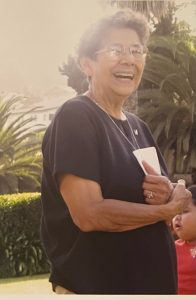 Ruth J. Paslay born Refugio Josephine Uribe passed in the early morning hours of December 31st in her home in Seattle, WA at 97 years old. Ruth spent her early childhood in El Paso Texas and then moved to Los Angeles California when she was 6 years old where she lived with her parents and seven siblings, in Los Angeles she attended school and went on to graduate from Theodore Roosevelt High School in 1944. After graduation she worked babysitting and housekeeping jobs and enjoyed going out dancing at the Hollywood Palladium with her older sister, during this time she also started a pen pal relationship with a man away at war, Joe Paslay who she would later marry in Los Angeles in April of 1945.

After Ruth married, she moved to Seattle with her husband and became pregnant with her first child born in 1946, she would have three children all 5 years apart. After raising her kids Ruth decided that she would go out and get a job and was hired on with Pacific Northwest Bell phone company working a switch board, connecting long distance calls, she stayed with the phone company until she retired in 1987 After she retired from the phone company if she was not spending time with her 3 grandkids and her kids she was traveling with a group of ladies also recently retired, Ruth had many trips and adventures with her friends, she loved to travel and have new experiences, she would always talk of her trips and cherished the memories she made with those friends. After sometime she took another job working part time for the King County Elections, counting state and county election ballots, she spent 19 years at King county elections just shy of another retirement, but she wanted to be home, She now had a great granddaughter and later on a great grandson that she spent as much time with as possible, when she wasn’t with her great grandkids or other family she did what she enjoyed, she loved to read she sometimes would read a book a day, she did word puzzles, she said “to keep my mind sharp”. 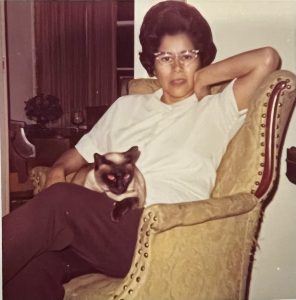 She drove a car at 97 years old with a valid license, she gardened and mowed her own lawn at 97 years old, she said “the trick is to stay active and not sit around” Ruth came into this world with a bang and she left this world with a bang, Born July 4th, 1924 on a day of celebration and fireworks and left this world on December 31st, 2021 , NYE on a day of celebration and fireworks, she was in life a real firecracker, standing up for what she though was right and always speaking her truth, working hard for what she had and loving and living for all her kids, she loved all of her family very deeply. 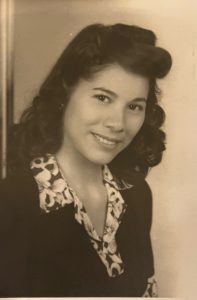 In the end she said, “I’ve lived a good life, I lived for you kids” She is now home with her lifelong love, husband, Joe Paslay. She is survived by her Brothers Toto Uribe & Joey Uribe, her daughter Terri Paslay her son Mark Paslay, Daughter in law Carolyn Paslay her grandkids Aaron Paslay, Alaina Weiss, Cory Paslay, her Grandson in law Josh Weiss, her great grandkids Kaylee Paslay-Moore & Aidan Paslay and many, many, many nieces, nephews, and cousins. A celebration of life ceremony will be held in Spring 2022.