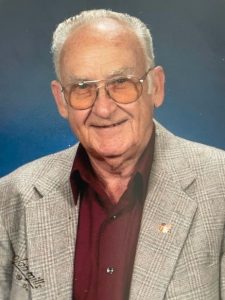 Robert Wayne Cochran went peacefully to the Lord on December 17, 2021, with his loving wife Patty by his side. Robert was born October 24, 1933, in Leesville, MO, to parents William Boyd and Rosella Cochran. He is survived by his loving wife, Patty, and his three grown sons, William, Robert, Jr, and James. The greatest blessing of his life was his grandchildren, Kelsie, Kenneth, Dylan, Lucas, Justin, and his great-grandchildren, Adaline, Logan, and Miller.

Robert came to Washington in 1952 from Clinton, MO, and served two years in the Army. Robert came home and went to work for the Milwaukee Railroad as Locomotive Engineer and was promoted to Traveling Engineer, where he worked until they closed. Robert then worked for Burlington Northern Railroad until he retired. At the time of retirement, Robert had worked 40 years for the railroads. Bob always said he was lucky that he got to work on a job that he loved. Bob loved working on old cars and was always restoring or tinkering on something. Above all else, Bob loved his family and his home. His grandkids loved the fact that he was a storyteller and was he famous for his words to live by and one-line quotes.

Robert will be missed greatly by all those who knew and loved him.

In lieu of flowers, donations may be made to Seattle Cancer Care Alliance.