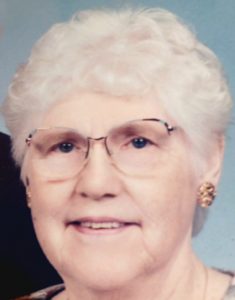 Joyce Wilma Lahr was born July 6, 1926 to Will Lahr and Ethel Hodgson of Shell Rock, Iowa. She lived there on the family farm until she graduated high school in 1943. She immediately set off on her own and lived in a women’s boarding house in Washington DC while she worked as a typist. After her 18th birthday she enrolled in the Cadet Nurses Training Program there.

One day Joyce was roller skating with some friends when a handsome sailor skated by. He returned to active duty a few days later, but they spent the next year writing letters. When the war ended Everette Spatz and Joyce Lahr were married February 14, 1946 in Shell Rock, Iowa. They moved immediately to Washington State where they spent the next 66 years together.

Joyce and Everette made their first home in Napavine, then moved to Winlock when their growing family needed more space. They lived several years in Port Orchard and finally settled in Shelton in 1973.

In 1963-64 Joyce decided to complete her interrupted nursing degree. She graduated from Centralia Community College LPN program with a proud family in attendance at her capping ceremony. Joyce’s work experience included: a doctor’s office in Centralia; a nursing home in Bremerton; and an optometrist office in Shelton.

Joyce was active in the United Methodist Church, volunteering in several capacities over the years. She was an accomplished quilter, contributing many charity quilts through her association with the Christmas Town Quilters Guild in Shelton. Other hobbies included gardening, reading and traveling.

Joyce was preceded in death by: her parents; sisters Betty and Donna Mae; son, Mitchell; and husband, Everette.

Joyce’s ashes will be added to the gravesite of her son, Mitchell, in Winlock, WA. In lieu of flowers the family suggests contributions to a local food bank or favorite charity. Memorial services will be held at a later date.