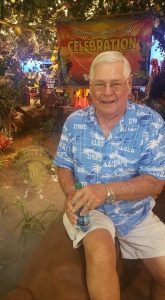 Jack L Coldiron passed away on January 14, 2022. He is survived by his ex- wife Helen and 3 brothers and sister. He is also survived by his 6 children; Debra, Cathy, Kevin, Stephanie, Timothy and Patricia. He also has 9 grandchildren and several great grandchildren. He was a medic in the Navy during the Korean War. Jack was an avid golfer after the Korean War. He almost went pro and got two hole-in-ones. His memorial service will be TBD. He passed away in Washington State.