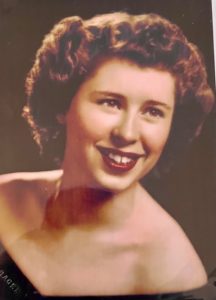 Glenna Joy Parrish was born to Catherine and Elwood Parrish in Palouse, Washington on July 10, 1929. She attended school in Palouse and graduated from Palouse High School in 1947.

Joy was a member of the Palouse Christian Church and was their Treasurer through High School. She attended Washington State University in Pullman, Washington.

Joy worked at Williamson’s Department Store in Palouse, Washington during High School as their bookkeeper. After her sons started attending school, Joy was the Office Manager at the Pullman Grange Supply for 25 years. She, and Jack, left for Southern California in 1987 where they were busy in Real Estate, primarily in the Palm Desert area, until they retired in 1994.

They retained their home in Thousand Palms, California, as well as their home on Lake Coeur d’ Alene, Idaho until 2003. They eventually settled in Hayden, Idaho at Leisure Park. Joy kept very busy as the primary caregiver to her husband Jack. She enjoyed working in her garden and canning much of what she grew.

Joy has resided at The Quarry Senior Living, in Vancouver, Washington, since the passing of her husband Jack, in 2016.

Joy was preceded in her death by her parents, Catherine and Elwood Parrish, her sisters Valeda (Vee), Juanita, and her brothers Dwight (Swede), Vernon (Vern) and Elwood (Bud).

A Memorial, for the family, will take place at a later date.