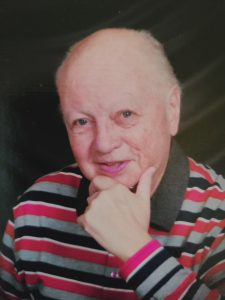 Dennis Charles Crabb was born on May 16, 1944, in Seattle, Washington. He attended Central Washington University and the University of Oregon where he earned the Doctor of Musical Arts degree in 1979. He retired as Professor of Music at Peninsula College, Port Angeles, WA. Dennis passed away peacefully at PeaceHealth Hospital Vancouver, WA, with his wife Li Li, and daughter Chelsea and her boyfriend Bret by his side on March 18, 2022 at age 77.

Dennis is survived by a loving family: his beautiful Chinese wife Li Li Crabb with whom he had performed many concerts and recorded multiple albums; his three beloved children from a previous marriage – James, Nicholas and Chelsea – and two grandchildren Colton and Bonnie; his older brother James Crabb and wife Anne Crabb; and nieces Carrie, Kathy and Jenny and their families.

Dennis had a great sense of humor and couldn’t stand life being too serious. Not surprisingly, he is gaining a lot of attention in death just like he did in life. The many phone calls and postings about him from friends, students and neighbors have been overwhelming. Dennis led an interesting life, traveling to most European countries and to China, he studied and taught music, conducted numerous choirs and orchestras, and played multiple instruments such as piano, recorder and saxophone. He loved music, teaching, traveling, people, wine and food–you name it. Dennis used to say “Falling asleep during a concert is a compliment to the composer.” On the day of his passing, he fell asleep and closed the final curtain after listening to French composer Eric Satie.

Perhaps friends still remember the time when Dennis and Li Li performed one of the Frank Sinatra’s songs “My Way” by Paul Anka from many years ago, and just like the lyrics of the song – Dennis did it HIS WAY.

And now, the end is near
And so I face the final curtain
My friends, I’ll say it clear
I’ll state my case of which I’m certain
I’ve lived a life that’s full
I traveled each and every highway
And more, much more than this
I did it my way

Regrets, I’ve had a few
But then again, too few to mention
I did what I had to do
And saw it through without exemption
I planned each chartered course
Each careful step along the byway
And more, much more than this
I did it my way

Yes, there were times, I’m sure you knew
When I bit off more than I could chew
But through it all, when there was doubt
I ate it up and spit it out
I faced it all and I stood tall
And did it my way

I’ve loved, laughed and cried
I’ve had my fill, my share of losing
And now, as tears subside
I find it all so amusing
To think I did all that
And may I say, not in a shy way
Oh no, no, not me
I did it my way

For what is a man, what has he got
If not himself then he has not
To say all the things he truly feels
And not the words of one who kneels
The record shows, I took the blows
I did it my way

Please join us for a memorial service to celebrate the life of Dennis Crabb. We will gather together on 5/21/22, 2 PM at Sequim Trinity United Methodist Church (100 South Blake Ave, Sequim WA 98382) to remember Dennis Crabb whom will be truly missed. Please share this information with family and friends. All that are interested and would like to contact the family may do so at: lilicrabb@gmail.com.