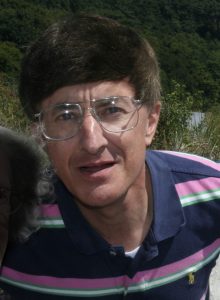 David was born September 21, 1956 in Tacoma, the first child of Stuart and Elspeth Alexander. The family moved to Shoreline, where David grew up, attending Hillwood Elementary, Butler Junior High, Einstein Junior High, and Shoreline High School. Afterward, David attended Central Washington University, receiving a degree in accounting. David worked for many years in accounts receivable – he was a font of accounting know-how who companies called upon to reconcile tricky accounting discrepancies. Additionally, he worked for decades as a vendor at Seattle stadiums. David worked alongside Bill the Beerman (for those old enough to remember), and evolved into his own beloved and well-recognized presence at Seahawks and Mariners games.

David proudly identified as having Aspergers syndrome. He particularly relished displaying his savant abilities that resulted from this. If you named any day in history, David could tell you within seconds what day of the week it fell upon. He had perfect recall of every day of his life since he was a small child, and could tell you on any given day from the past what he was doing, what you were doing if you were there, and what the weather was like, back into the 1950s.

His unique mind and perceptive abilities brought him great joy at times – in particular, he enthusiastically described engaging in a practice that he called “eye photography,” where he would watch a beautiful natural object like a cherry tree until it caught the light perfectly in a way that he would take a mental “snapshot” of and call up at will. He developed an intense focus on a selection of topics that figured heavily in his conversations, most notably the weather, but also aspects of philosophy and economics (he was a devoted “gold bug”). He kept detailed daily weather records as a child, and later in life could be counted upon to provide a richly detailed answer to the question, “so how’s the weather today?”

He took great joy in traveling. He particularly sought out total solar eclipses, traveling as far as Western Europe and Turkey to see them. New Zealand was his favorite country, for its scenery, and he made multiple trips there.

David’s life was not always easy. As a person on the spectrum, he sometimes struggled with life skills and societal expectations. He did not drive, never took the Certified Public Accountant examination (although we are confident he would have crushed it), and struggled in some academic settings, all because of his neurodifferences. But he was never bitter or angry about his lot. David remained quietly accepting of it all, resting on a well-developed philosophy of determinism. And despite his struggles, he remained intensely loyal to family, faithfully visiting and caring for his mother as her health failed.

He is fondly remembered and deeply missed.
A celebration of David’s life will be held Saturday, April 16 at 11 a.m. at Beck’s Restlawn Memorial Park, 23800 104th Ave W, Edmonds, WA.

In lieu of flowers, donations in David’s honor may be made to the Organization for Autism Research, https://researchautism.org/.