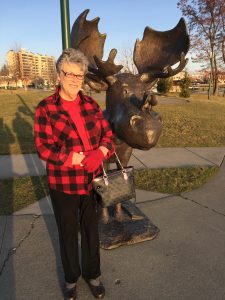 On Saturday, August 22, 2020, Barbara Kaye (Thoburn) Davies, loving daughter, sister, and mother of two children, passed away at the age of 78 in Olympia, WA.

Barbara was born March 2, 1942 in Daytona Beach, FL to Robert and Marguerite Thoburn. Barbara grew up on the inter-coastal waterway a short walk from the ocean with older twin brothers and a younger brother. As a teenager she worked at the beach two summers at one of her brother’s float stands and later worked at her dad’s dental office for two summers. After graduating from Seabreeze High School, Barbara attended Huntingdon College in Montgomery, AL for two years. In college Barbara met Joe Hendrix. They were married and had two children together, Nelson and Steve. They were divorced after a short marriage.

During her early adult years, Barbara worked at the Apollo Support Department of General Electric from 1964 – 1967. It was there that she met Dick Davies. They were married, and over the next 12 years, the family lived in Dallas, TX, Thousand Oaks, CA, and Denver, CO. Barbara and Dick were divorced in 1980, and Barbara began working for Gates Rubber Company. In 1982 Barbara joined the Mile High Church of Religious Science as well as International Toastmistress Club, an international organization for developing leadership, communication, and organizational skills. Over the next eight years, Barbara served in all club and counsel offices and served as president of the club in 1988.

Barbara dated Ralph Hardy for 16 years. They were great companions and enjoyed dancing, taking day trips, and doing other activities together. She attended massage therapy school in the mid-1990’s after which she became a massage therapist. Massage therapy was fulfilling and rewarding for Barbara before she retired in 2008. In 2010 Barbara was ready for a change and moved to Sequim, WA on the Olympic Peninsula to be near both the water and the mountains.

Barbara was a creative person and put her trust in God every day for guidance, health, wealth, love and self-expression. She loved arts and crafts from decorating box purses in the 1970’s; to bead jewelry in the 2000’s; and colored, fused glass decorations in the 2010’s.

The family intends to have a small private memorial on a future date.