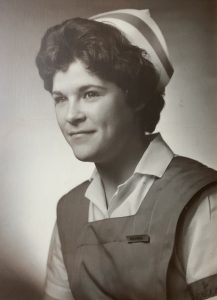 Barbara Joan (Barb) Banhagel passed away suddenly of natural causes on August 28, 2020 at the age of 77.  On that Friday, the world lost a truly delightful human, a beloved sister, mother and grandmother, and a treasured friend to many across the country.

As a Licensed Practical Nurse (LPN) for 56 years, Barb was a tireless caregiver to countless individuals in need of her positivity, patience and kindness during often difficult moments. Though she had been living and working for many years in Olympia when she passed, Barb had also applied her nursing skills in Michigan, California, and Minnesota.  Much of her time in recent years was devoted to helping residents of assisted living facilities cope with their health issues and the impacts these had on their daily lives.  But, perhaps her proudest achievement in decades of nursing was during the period in the 1980s and early 90s she worked for Olympia cardiologist Dr. Bill Gavin.  Together, their successful efforts in 1982 getting the heart catheter lab stood up in Olympia’s Providence St. Peter Hospital has contributed to the saving of many lives in the years since.

Barb was born Barbara Joan McKinney in Bakersfield, California on June 4, 1943.  She graduated from high school, earned her Associate Degree, and first became an LPN in the Kalamazoo, Michigan area.  Her career would subsequently take her from the Midwest to the West Coast.  Though nursing was deeply meaningful to her, she was first and foremost a hard-working single mom providing for her 3 daughters (Mary, and twins Kathy and Kris).  She was determined to provide stability and emotional support while raising her girls during some tough, trying circumstances at times.  Though Barb’s son Michael didn’t live with his mom while growing up, as an adult he drew close to her.  Mary ultimately had two children of her own (son Paxton and daughter Madeleine), as did Kathy (son Talon and daughter Brynn), and Michael (son Beckett and daughter Ava).  Barb was so proud of her kids and grandkids, and of her influence in their lives.  She is survived by all of them, as well as by 3 siblings (Steve, David, and Martha) and many nieces and nephews.

All who knew and loved her will remember Barb’s dimples, bright smile, and quick laugh.  She had a great sense of humor and was a good listener and conversationalist.  Those traits gave her a soothing bedside manner to those under her nursing care.  If she were describing a dish she found particularly delicious, she would say it was “wuuuuun-der-ful” – drawing out the first syllable as if it were a bite to be savored and salivated over.  She was an excellent cook and her salads were divine.  But for years, she had tried to duplicate her mom’s chili recipe to no avail.  There was just something missing in Barb’s version.  Barb always pestered her mom to give up her secret ingredient, but the answer was always “someday I will”.  And her mom kept her promise, divulging posthumously: “It’s the cloves, Barb”!   She loved her cats, several of which she owned during her life.  She loved sitting out on her deck and taking care of her flower garden and houseplants.  And she was truly, truly loyal to her friends, many with whom she enjoyed decades-long relationships.

Though Barb is gone, she will not be forgotten.  Her memory will continue to live in the hearts and minds of her family and friends.  A Celebration of Life will be held on Sunday, September 13 from 1-5 PM at Barb and her daughter Kathy’s home (8925 Armstrong Rd SW, Olympia).

Flowers gratefully declined.  In lieu of flowers, monetary donations may be made to Operation Smile.  If desired, please click on this link for more information:

Arrangements made by the Western Cremation Alliance.  Condolences may be offered at https://westerncremation.org.